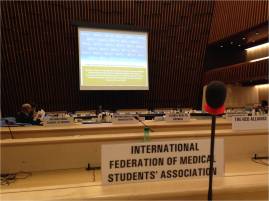 Cancers, diabetes, heart and lung diseases threaten the lives of millions of people worldwide. The economic impacts on households and health systems are so large that, especially in low- and middle-income countries, NCDs pose major poverty and development challenges.

More than 12 million deaths from noncommunicable disease (NCD) occur between the ages of 30 and 70 in developing countries, which constitutes one of the major challenges for development in the twenty-first century. Premature deaths from NCDs in developing countries undermine social and economic development, threaten the achievement of internationally agreed development goals and may lead to increasing inequalities within and between countries and populations.

“The weak capacities in developing countries to tackle NCDs result in premature deaths from NCDs, reduced productivity, curtailed economic growth, and trap the poorest people in chronic poverty,” Ambassador Taonga Mushayavanhu, Permanent Representative of the Republic of Zimbabwe to the UN in Geneva.

Reducing both poverty and the number of people dying prematurely – before the age of 70 – from NCDs was the focus of a high-level strategic dialogue held on 20-21 April 2015 in Geneva by the WHO. This Dialogue on NCDs, poverty and development cooperation was one of the meetings part of the WHO Global Coordination Mechanism on Prevention and Control of Noncommunicable Diseases  (GCM/NCD), where IFMSA as organization with official relations with WHO was invited to take part as a representative of the voice of young people in face of the worldwide epidemic of NCDs and for this occasion represented by the Liaison Officer for Public Health issues Arthur Mello.

The WHO GCM/NCD was established in response to the 2011 UN Political Declaration on NCDs, its scope and purpose is to facilitate and enhance the coordination of activities, multi-stakeholder engagement and action across sectors at the local, national, regional and global level to prevent and control NCDs in line with the WHO Global NCD Action Plan 2013-2020.

The Dialogue engaged Member States, other United Nations agencies, and representatives from academia, NGOs and the private sector in the first-ever dialogue on tackling the connected issues of NCDs, poverty and development cooperation.

IFMSA contributed to the dialogue raising the importance of an explicit focus on youth to achieve the objectives of the Global NCD Action Plan 2013-2020. Highlighting that the prevalence of NCDs is related to unhealthy behaviors and practices typically initiated in adolescents, which will have a direct effect on their risk of developing NCDs later in life. Building a healthier future depends on effective interventions during this critical window of opportunity.

Another important topic addressed by IFMSA was the necessity of improvements on the analysis of risk factors among youth, once this can give us more resources about their future influence on the burden of NCDs and help governments to develop more policies and programs focused to mitigate those risks and promote healthy lifestyles.

Although NCDs affect many young people from different parts of the world and with different realities of access to health, most prevention measures are not targeted towards this age group. However, it’s important to keep in mind that the young people from the present are the ones who are going bear the consequences of inefficient actions on the burden of NCDs in the future.  IFMSA will continue to advocate for effective measures towards the relation NCDS/Youth in all NCDs policy discussions and make sure that we are all following a safe and healthy path.

The World Health Organization (WHO) 136th Executive Board Meeting is currently taking place in Geneva, at the WHO Headquarters, between January 26th and February 3rd 2015.

IFMSA is represented by a delegation composed by our President, Agostinho Sousa, our Vice President for External Affairs, Claudel Desrosiers, Ivan Seah, from AMSA-Singapore, and myself, Pedro Correia de Miranda, Liaison Officer to WHO.

Over the course of the week, 193 member states, dozens of NGOs and Civil Society itself, are discussing and updating the World on a multitude of issues that includes namely: the Ebola Outbreak, the Post 2015 Agenda, Health Systems, Violence and Health, Trade Partnerships and Climate Change. Negotiations go on all day (and night if needed!) in order to produce an Agenda for the next World Health Assembly (WHA), happening in May.

We have two main goals this week:

As such, we have been drafting and delivering many statements that have been posted on the blog. Those statements match IFMSA global priorities, and are aligned with the Federation’s policy statements.

We are thrilled to be here on IFMSA’s behalf, and reassure you that we are working hard on promoting our opinions as the voice of the youths at WHO. Should you want to get involved or give your opinion, please do not hesitate to approach Pedro, IFMSA Liaison Officer to WHO, at lwho@ifmsa.org.

Statement submitted to the World Health Organization (WHO) 136th Executive Board Meeting.

The International Federation of Medical Students’ Associations strongly welcomes and fully supports the adoption of the resolution on the Ebola outbreak. IFMSA represents a global network of medical students in 116 countries.

IFMSA regrets the deaths and injuries caused by this disease. This outbreak showed us the importance of investing in health and in the socio-economic determinants of health. It was fortunately seen as an eye opener to the need of countries to strengthen their health systems and their public health policies in times of large-scale outbreaks. We acknowledge that we should have been better prepared to face this epidemic, and we strongly support this resolution.

IFMSA calls WHO to:

We are pleased that this outbreak is serving as a learning opportunity. With in mind the importance of the implementation of the International Health Regulations, we encourage Member states to work towards health systems strengthening; increased disaster preparedness and response; and an adapted and up-to- date education and training of healthcare students to face similar challenges. This will only help us saving thousands of lives.

IFMSA has witnessed an incredible sense of leadership and of unity within our network since the outbreak started. Through the Kick Ebola Out Campaign led by students from Sierra Leone and Guinea, our members have been engaging the public through health education and sensitisation programs. We welcome those efforts with gratitude. We conclude with stating that IFMSA commits to continue providing our members with capacity-building opportunities so they can grow as doctors who will shape a sustainable and healthy future.

There was an error retrieving images from Instagram. An attempt will be remade in a few minutes.